At Long Eaton Running Club, we cater for all ages and abilities, from the 12 minute miler to the 12 miles an hour athlete. We run on Tuesdays and Thursdays, meeting at 6.30p.m. for an optional warm up session then start running at 7pm. We organise at least 2 different distances to cater for different abilities & if you are new a LERC member will stay with you so you won't get lost. After training, a few of us always go for a beer or two at a local pub, so please join us for a chat. Have a look around our site and if you fancy a run with us why not pop along one club night. We don't bite.

The next event in the calendar is : Notts- Hexgreave ‘ summer league’ race

Congratulations to Richard Cliff
Another member who has been seriously considered for Runner of the Month before, for his strong progress and continued improvement, despite being a V55! Saying that, our incredibly strong V55 group as a whole, defy belief time and time again with their running.

After being injured for a period of 2019, Rich has worked hard to get back into the shape he was in and has started 2020 with an absolute bang and is making himself known to be one of the best V55's in the area, particularly over XC, where he sets a high standard. Beginning at the county championships, Rich was on the podium, claiming a fine 3rd place for Derbyshire on a very tough course, beating many younger athletes, which is a top achievement in itself.

Since then, Rich has established himself on the BDL series too, with an age category win at Bramcote, which now positions him very well in the overall series - with what is now essentially a race-off at the final race, to determine whether it's a gold or silver he ends up with!

Whilst it difficult to work out Vet category placing in the East Mids series, Rich again ran a superb race at Holme Pierrepont to come in as second LERC back and no doubt in amongst the leaders, if not the victor for his category. The 149 point haul, also helped move him to joint top of our competitive V55 league.

Finally, without a XC to take part in last weekend, Rich settled for a parkrun and ran another sub-20 clocking, only 12s off his PB - Further proof, if needed, that he's back and running brilliantly! Hopefully the injuries stay away so that we get to witness just how successful he can be. 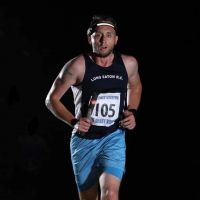